The day of the exam

Prior to the exam, registered candidates will receive detailed guidance regarding the exam process and they must have agreed to the exam regulations. Exam Regulations can be found here.

The structure of the day

There will be both a morning and an afternoon sitting of the exam. Please note it is vital candidates are ready to sit the exam at the designated time, otherwise the attempt will be invalid.

The first activity on the day of the exam will be the candidate registration, ID check and briefing, which will be undertaken on Zoom. Suitable identification documents must be original, current and bear a photograph and are listed below:

If the name on the identification document is different from that on the confirmation from the Faculty offering a place in the examination, original evidence must be provided in good time that the candidate is the person named in that letter. The Faculty will accept:

Further details about how and when to provide identification can be found in the candidate pack.

On logging into Practique, each candidate will be in a virtual ‘meeting room’. An invigilator will ask the candidate to show their identification and to scan the room with their camera to ensure exam security.

The role of the Invigilator

Candidates must act on the instruction of invigilators only.

Once the exam is in progress, candidates will rotate around six preparation and six examination stations, with each of these stations being eight minutes in duration. Between all stations, there will be a short gap (usually one minute) to facilitate the transition of candidates. 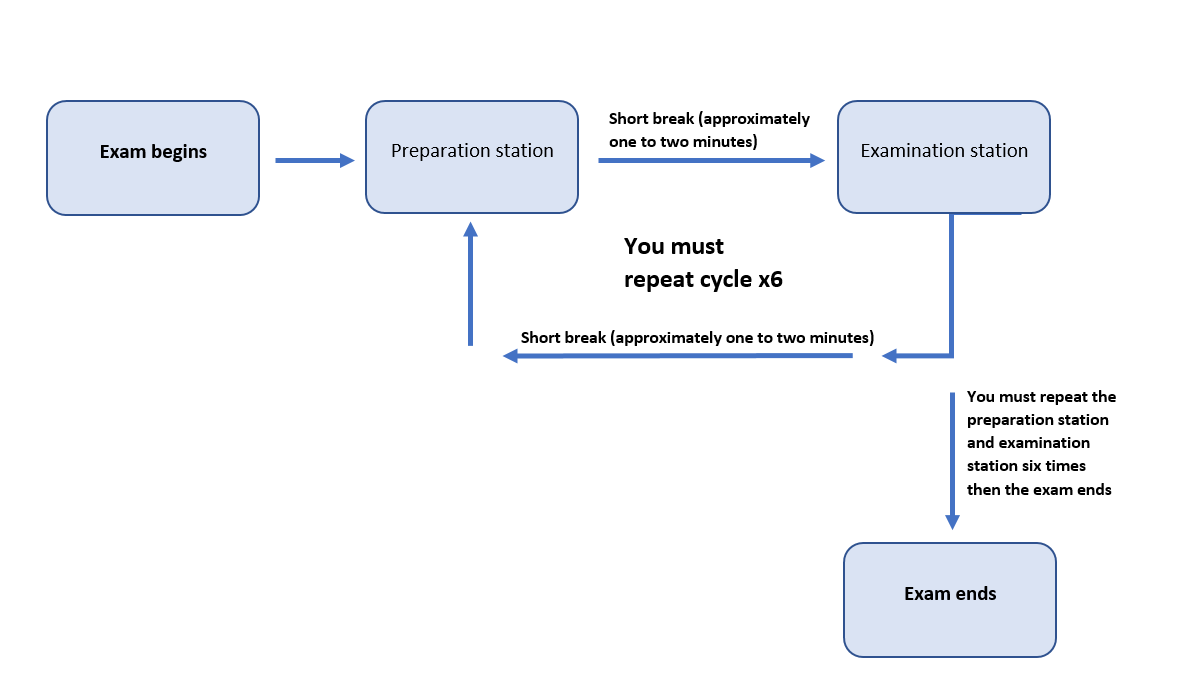 The candidate will be permitted to use the bathroom between the end of the briefing session and the start of the exam itself. They must ensure they are logged into the system by the instructed time. Candidates should remain on screen at all times. The Faculty discourage use of the bathroom during the exam itself, however if necessary, please use the preparation time. The candidate will need to notify the invigilator they are connected to and this will be recorded in their report. No extra time will be given. No breaks will be permitted in the examination.

If a candidate’s internet connection fails for less than four minutes during a preparation station and they are able to reconnect, they should inform the invigilator this has happened. The invigilator will record this as part of their report. On entering the relevant examination station, the candidate should also inform the examiner of the loss of connectivity.

If a candidate’s internet connection fails for less than four minutes during the examination station, the examiner will record this as part of their report. No additional time will be granted to the candidate.

If a candidate’s internet connection fails for more than four minutes during a preparation station or examination station, the candidate may be offered a re-run (details below) or if this isn’t possible the remaining five stations will constitute the final marks. Should the issue affect more than one station, the exam attempt may be voided.

At the end of each exam session, a re-run of a station is possible. This may be conducted if there has been a loss of internet connection:

Please note the final decision whether a re-run will go ahead lies with the Chief Officer of the sitting.

Recording of the exam

Examinations may be recorded for training purposes and exam security.

The day of the exam

To provide you the best browsing experience possible, our site uses cookies. By continuing to use our site, you accept our use of cookies. Learn more about cookies we use.